How my neighbor saved America 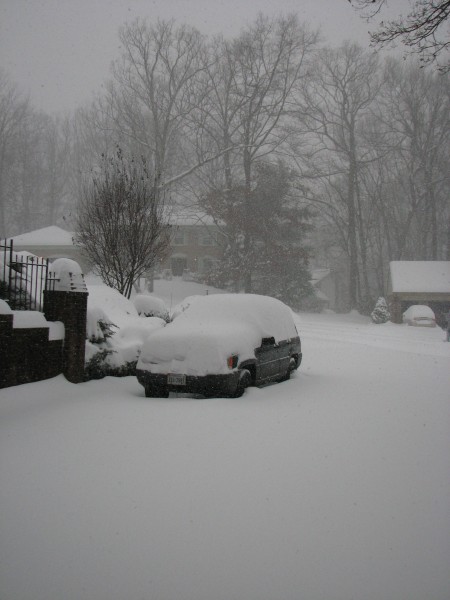 The snow came down for 24 hours, an astonishing sight for Northern Virginians.  Morning, noon, night – it seemed like it would never stop.  When it finally did, nearly two feet of snow covered the world, making every object white and smooth.  My son’s Jeep looked like half an eggshell.

The human race divides into two hostile camps:  snow-loathers and snow-lovers.  (Or, as my wife likes to say, “People divide into two groups – those who believe people are divided into two groups, and those who don’t.”)  My family belongs to the latter.  In the accumulation of ice crystals we find many virtues – not least, for the kids, that it keeps them out of school.

So we rejoiced in the enormity of this December blizzard, and we watched with glee the mountains of white stuff piling up.

A considerable amount piled up in our driveway.  It was a call for action, and we knew the drill.  Before the snow had stopped falling, the family was busy shoveling it away from our private, carbon-emitting-transit strip.  Two feet of snow, we soon learned, is a lot.  We struggled.  After several determined assaults, the driveway was cleared only halfway to the street.

This story has a moral, and it starts here.  One of my neighbors is a widow whose husband owned a snow-blower.  She lent it to another neighbor, whose family lives directly across the street from my house, and he happily blew out the snow from the widow’s driveway and his own.

Then he kept going.  He cleared the common sidewalk, and another older neighbor’s driveway – and then he finished off ours.  This wasn’t easy work.  Temperatures were below freezing, and the brisk wind blew the snow back on our heroic neighbor, so that he resembled, by the end, a hyperactive ghost.  But he kept going.

We get along excellently with this neighbor and his family, but the reality of it is that we are busy, and they are busy, and whole months will pass without our exchanging more than a few words of greeting.  He didn’t clear the driveway as a personal favor.  He did it for a far nobler reason:  neighborliness.

I have spent time in countries where the idea of helping someone who isn’t family would be considered eccentric if not foolish.  I have seen people watch a house burn without lifting a finger.  In such countries, when anything goes wrong in any way, a loud scream goes up for government assistance.  Self-help is never an option.

At least since Katrina, the chattering classes in this country have promoted a similar attitude.  We, the citizens of this democracy, are portrayed as mindless and helpless.  The failure of the federal government to intervene gets blamed for losses in natural disasters – what used to be called, in simpler times, acts of God.

There follows a call to regulate, to take away choices, to protect the citizen-children from themselves.  Today the regulatory zeal has reached high tide for my lifetime.  An important part of our way of life, based on mutual assistance and free association, has been put in question.  We are told to become humble petitioners to a government which should be our servant.  It will be hard, in that posture, to retain the dignity and self-worth of a free people.

My neighbor smashed through all that cant in the same way he plowed through my driveway.  He helped others freely, because he could.  He went at it quietly, trying not to be noticed, without thought of reward.  (My wife said, “I see cupcakes in that man’s future,” but nothing could have been further from his mind.  His wife said, “He just loves power tools.”)  With zero posturing, he upheld a way of life to the degree that it was in his power to do so.

No doubt he’s certain that, had the situation been reversed, we would have done the same.  I hope I can live up to his expectations. 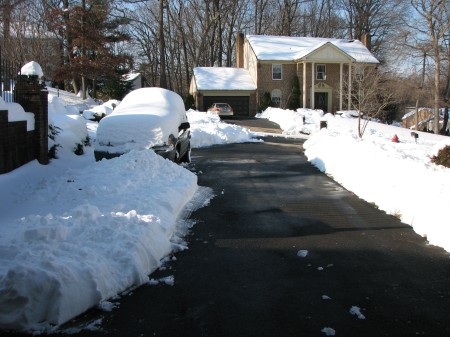 This entry was posted on Monday, December 21st, 2009 at 2:20 pm and is filed under moments. You can follow any responses to this entry through the RSS 2.0 feed. You can leave a response, or trackback from your own site.

2 Responses to How my neighbor saved America